When the Town engaged the Development Finance Initiative (DFI) in 2018 to create a revitalization roadmap, the West Southern Pines neighborhood was well organized, with many Black-led community groups, churches, and organizations like the Southern Pines Housing and Land Trust. Yet even with a Town task force focused on the neighborhood, the relationship between the local government and the neighborhood was fraught. For example, an attempt at neighborhood beautification, involving the removal of abandoned vehicles from the street, demonstrated to some in the community, especially those whose cars had been towed, that the Town still did not understand what residents wanted or needed in their neighborhood. As one neighbor noted, a conversation shouldn’t start with punitive measures.

While local governments around North Carolina have sought out DFI for finance and development expertise for over a decade, the facilitative role that project managers play in many projects can often be as powerful for a client as any technical financial analysis. Most DFI engagements begin with public engagement—often focused on local officials—to identify and articulate what public interests should guide development projects.

DFI’s facilitative role includes opening new or better lines of communication for local officials with project stakeholders. Many local governments engage DFI to facilitate communication with private developers and investors from outside the community. Yet for some projects, improved communication and a skilled facilitator are needed within the community as well. In these cases, intensive community engagement must precede any discussion about specific development projects.

DFI’s community engagement strategy is tailored to the unique context and dynamics of each project. In West Southern Pines, DFI Project Manager Sarah Odio knew that being an outsider would come with advantages, though it meant a long process of trust building. She worked closely with DFI Associate Director and engagement specialist Marcia Perritt to identify an approach that would bring as many voices into the conversation as possible.

“As a third party, we were given grace to start from scratch,” Odio said. To understand the neighborhood’s history, current relationship with the larger town, and aspirations – its unique interests – Odio’s goal was to “listen, listen, listen with fresh ears and then share what we heard with the town council.”

“We asked community leadership what had been tried before and why it didn’t work,” said Odio. “It really came down to residents not feeling like they’d been heard by the Town.

“We started with educating ourselves on the work that had been done to date so that we entered conversations understanding the local history. With that foundation, we proceeded to one-on-one conversations with local stakeholders identified by leadership. This allowed us to build relationships and learn from and pay respect to the people that have been beating the drum for their neighborhood for a long time.”

This process began in the early days of the pandemic, which made in-person meetings infeasible. So Odio started making phone calls, getting to know community members and giving them space to tell her their stories. She also asked what her team could do to engage the community in a group forum.

Based on what they learned, the DFI team facilitated multiple group meetings at different times over several weeks. The pandemic forced the team to innovate and rely on a mix of old and new engagement practices, aware that virtual meetings presented challenges for some residents. While meetings were held online, DFI staff also mailed postcards with dial-in and login details to every home in the neighborhood. In addition, a DFI team, including graduate student fellows and DFI professional analysts, was deployed to do on-the-ground data collection in the neighborhood. This created buzz among neighbors who were curious about the unfamiliar folks with masks and clipboards roaming the streets. This presented a chance to have more conversations between community members and the DFI team.

One of the key takeaways from these engagement efforts was that the lines of communication between the neighborhood and the Town—what Odio refers to as the “essential infrastructure” of community development—were tangled at best. Even with the task force in place, the Town had no mechanism for learning from and listening to community concerns, and while the community was well organized, most of the opportunities and issues they discussed amongst themselves never made it back to the Town.

Revitalization, to West Southern Pines, needed to be about more than physical development. The neighborhood wanted locally-owned businesses, safe and attractive homes for residents, and projects that recognized and built off local history and historical assets—including Southern Pines Primary School.

As a result of this first phase of work, the Town replaced the task force with a long-term, community-led advisory group. The Town also decided to hire a permanent community planner, creating some of the “infrastructure” that it previously lacked.

Southern Pines Mayor Pro Tem and West Southern Pines resident Dr. Paul Murphy, who had originally reached out to DFI after learning about the community development and engagement work DFI did in Kinston, North Carolina, said that the work DFI did as part of its first phase was very valuable. DFI provided “an objective perspective and was a mediating factor between the Town and West Southern Pines,” Dr. Murphy said. Odio and the DFI team’s work was especially meaningful in “giving voice to the residents” – or, as Odio would put it, amplifying the voices of residents so that the Town could hear, understand, and act.

As a result of the successful first phase, the Town asked DFI to move forward with another phase of work: a pre-development process for a key neighborhood gateway, to result in a collaboration between the neighborhood, Town, and experienced developers on a project that supports the neighborhood’s unique goals. The Town also asked DFI to support the Land Trust, building the nonprofit’s capacity to take on transformative projects on its own.

DFI’s ability to undertake long-term engagements involving communities with unique interests, histories, and aspirations is enabled by support from LGFCU and its home within the School of Government.

“What makes our work powerful is that we make our partners better at what they do. Our approach in every community where we work is focused on building on the strengths that the community already has.” 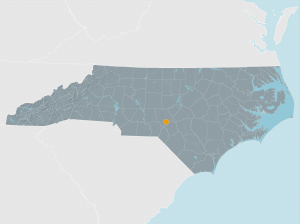