A community wanting to transform its downtown could focus on singular projects, but DFI analysis often reveals that a greater scale of redevelopment can enhance feasibility and achieve more impact. If an entire city block is vacant, the redevelopment of one building will not make a huge difference. Large-scale efforts will sometimes help mitigate the costs of development and allow for a shared vision and coordinated investment among public and private sectors—all factors that can enhance the likelihood of a successful and sustainable revitalization effort.

Much of Kannapolis’s downtown had been built and run for employees of Cannon Mills, the city’s namesake and once the largest textile factory in the world. In 2003, the mill closed and the 4,300 jobs that were lost marked the biggest permanent layoff in North Carolina history. The downtown, as well as the mill, had been acquired from Cannon Mills in 1982 by billionaire and Dole Food mogul David Murdock, who sold the mill in 1987 but held onto the downtown and surrounding acreage. Having a single owner of the area helped to facilitate the sizeable transaction between the City of Kannapolis and Murdock.

Presently, nearly half of the downtown is vacant and many of its historic structures are in states of disrepair. Few vestiges of Kannapolis’s formerly bustling downtown, where three movie theaters once played the newest films in sync with mill workers’ shifts, currently remain. Although the tax-assessed value of downtown totals $24.5 million, it represents less than 1 percent of the city’s total tax base. Now with the downtown under local government ownership and a 10-year partnership with DFI in place, city leadership has regained control over the fate of arguably its most unique asset.

Located just 25 miles northeast of Charlotte, one of the top 10 fastest-growing metro areas in the United States, Kannapolis appears well-positioned to channel regional growth into its downtown. The city envisions restoring its downtown to a vibrant urban center that connects hubs of economic and cultural activity. The demolition of the mill and related structures has left vast tracts of vacant land that present opportunities for new development. The city expects that new construction, such as a baseball stadium, performing arts venue, hotels, and perhaps even a children’s museum, will occur in concert with the rehabilitation and reuse of many historic structures.

The City of Kannapolis has engaged DFI to help guide and refine its vision through strategic sales, public investments, detailed financial and technical analysis, and partnerships with private developers. Although an undertaking as large as this one won’t happen overnight, progress is already underway. With DFI’s assistance, the city is planning $14 million in infrastructure improvements. It has established a Municipal Service District and hired a property management firm. DFI is in the process of creating a master development plan for the downtown that outlines specific strategies and projects that will move the city closer to its vision. Over the next decade, the City of Kannapolis and DFI expect to return 80 to 90 percent of downtown parcels to private ownership.

Located just 25 miles northeast of Charlotte and one of the top ten fastest-growing metro areas in the United States, Kannapolis is well-positioned to channel regional growth into its downtown. One of the reasons that Kannapolis can seize on this opportunity is because the city acquired its entire historic downtown core for $8.75 million in 2015. The purchase included numerous historic buildings and large swaths of vacant land where mill structures once stood.

“We’ve looked at adding a lot of density to downtown. The older mill town didn’t have much density to it. It had a lot of one- and two-story buildings,” said Development Finance Initiative (DFI) Development Advisor Jordan Jones. “With the population growth the City of Kannapolis has seen, it made sense for them to think about how to build a downtown. That way, they are not just a bedroom community.”

Kannapolis has engaged DFI to help guide and refine its vision for downtown through strategic sales, public investments, detailed financial and technical analysis, and partnerships with private developers.

“We need to think about how this will become its own market, that it won’t necessarily be driven by historical trends,” said Jones. “How do we take advantage of the opportunity we are creating? We’re creating a new district, we’re creating a downtown. We’re essentially creating our own market that can start to support a mix of uses.”

With DFI’s assistance, the city is planning $14 million in infrastructure improvements. Over the next decade, Kannapolis and DFI expect to return 80 to 90 percent of downtown parcels to private ownership.

Although an undertaking as large as this one won’t happen overnight, progress is already underway. On March 26, 2019, the city celebrated the groundbreaking of VIDA, the mixed-use district representing more than $50 million in investment in downtown. The development, which begins construction this year, includes apartments, office and restaurant space, and a parking deck expected to open in spring 2021. 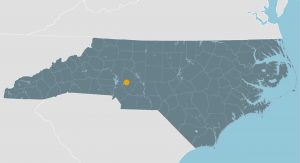