DFI’s work with the City of Albemarle involves all of the elements that make community development work both challenging and gratifying: a local economy still recovering from loss of industry and the recent recession; a historically significant yet vacant downtown building; local champions; a financial quandary; and, at its core, a student putting coursework into practice as a community revitalization fellow.

Albemarle is a small town with a population of just over 16,000. Its downtown is located at the crest of a hill with views of the Uwharrie National Forest in one direction and the mountains of western North Carolina in the other. Albemarle’s downtown comprises many underutilized buildings. Most of the occupied historic structures house government and public services, including the courthouse, city hall, public library, and post office. Just down the street from city hall, the historic Albemarle Hotel sits vacant and dilapidated. When the hotel opened in 1923 with modern luxuries (elevator, private baths, and telephones) it was deemed one of the outstanding hotels in the state.

The hotel ceased operations in 1964 as the town lost manufacturing revenue and is now owned by a local bank. Attempts to find other uses for the property over the years have been unsuccessful, and the bank has considered demolishing the hotel. In an attempt to avoid that option but uncertain how to facilitate redevelopment, the City of Albemarle turned to the School of Government for assistance.

Over the course of a year, community revitalization fellow Tanner Dudley identified a way to save the hotel. With guidance from project manager Rory Dowling, Dudley explored potential uses including retail, office, residential, and hospitality. His analysis convinced DFI staff that the hotel’s prominent location, commitment from both the local government and the bank, and national trends showing growing interest in downtown living could support a historic renovation project that would have a transformative impact on Albemarle’s downtown.

With a vision in mind, Dudley and DFI staff established a plan for the hotel’s conversion to 18 residential units, four retail storefronts, and a restaurant or brewery. Still, there were obstacles. The hotel required significant renovation.  Even with the use of historic tax credits and local government participation, a financial gap remained.

DFI identified both public and private sector tools that could be financial sources for the project and helped local stakeholders—the City of Albemarle, the property’s owner, the local historic commission, the downtown development organization, and potential local investors—understand their roles in the preservation of the hotel. This capacity-building effort has resulted in success. The local historic commission has established landmark status for the hotel, which results in a 50 percent property tax deferment for the life of the property as a long as it maintains its historical significance. The City of Albemarle is a member of the North Carolina Main Street Program, enhancing its eligibility for grant opportunities such as the Main Street Solutions Fund.

DFI’s analysis of the Albemarle Hotel concluded in March 2015, but the project in Albemarle continues. Dudley’s research has been shared in multiple public formats: it formed the basis for presentations to city officials, it was shared with the hotel owners for distribution to interested developers, and it was assembled into Dudley’s Masters Project (publicly available on UNC’s library website). Dudley went on to earn a Master of City and Regional Planning from UNC-Chapel Hill in 2015 and later became a project manager with DFI. Dudley’s mentor, Rory Dowling, continued to have conversations with the hotel owner and city when developers expressed interest in the hotel. DFI will continue to play a role in reenergizing Albemarle’s downtown and serving the public interest of this community. 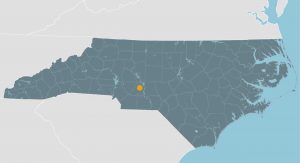 Albemarle is a great example of community partners working together to make something happen. Every person we spoke with in the town had something different to bring to the table to make the project come together.