Serving as a DFI Fellow is where the rubber met the road for Stephanie Watkins-Cruz, a 2018 graduate of UNC’s Master of Public Administration and Master of City and Regional Planning programs.

“The past three years has really allowed me to build an understanding of community development.

After working with DFI, not only do I have technical skills in terms of financial modeling and market analysis, but I’ve learned there’s a creative way that you can approach your problem or an issue or a building,” said Watkins-Cruz.

A native of Charlotte, Watkins-Cruz brought a passion for affordable housing to both her graduate study and her work with DFI. She has been assisting with the Initiative’s contract with North Carolina Emergency Management to find opportunities to build affordable housing in communities affected by Hurricane Matthew. She says, “I learned data analysis specifically for affordable housing, which I had not done before. But also, I learned a new way to think about capacity, when we’re looking at this type of project, when we’re trying to put as many units on the ground as possible.”

In addition to her work with DFI, Watkins-Cruz also worked at the Chatham County Council of Aging, contributing to a project that won an Excellence in Innovation Award from LGFCU in 2017. Stephanie organized a partnership of five organizations that created a collaborative database, providing a more efficient way of coordinating minor home repair and modification projects across Chatham County.

She is continuing that work in her new role in Chatham County as a policy analyst in the Chatham County manager’s office. “A big part of why I got my next job is because they saw that I’m passionate about affordable housing, but can translate some of the skills gained as a Fellow,” she said. 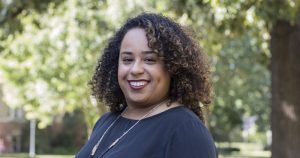 A big part of why I got my next job is because they saw that I’m passionate about affordable housing, but can translate some of the skills gained as a Fellow.